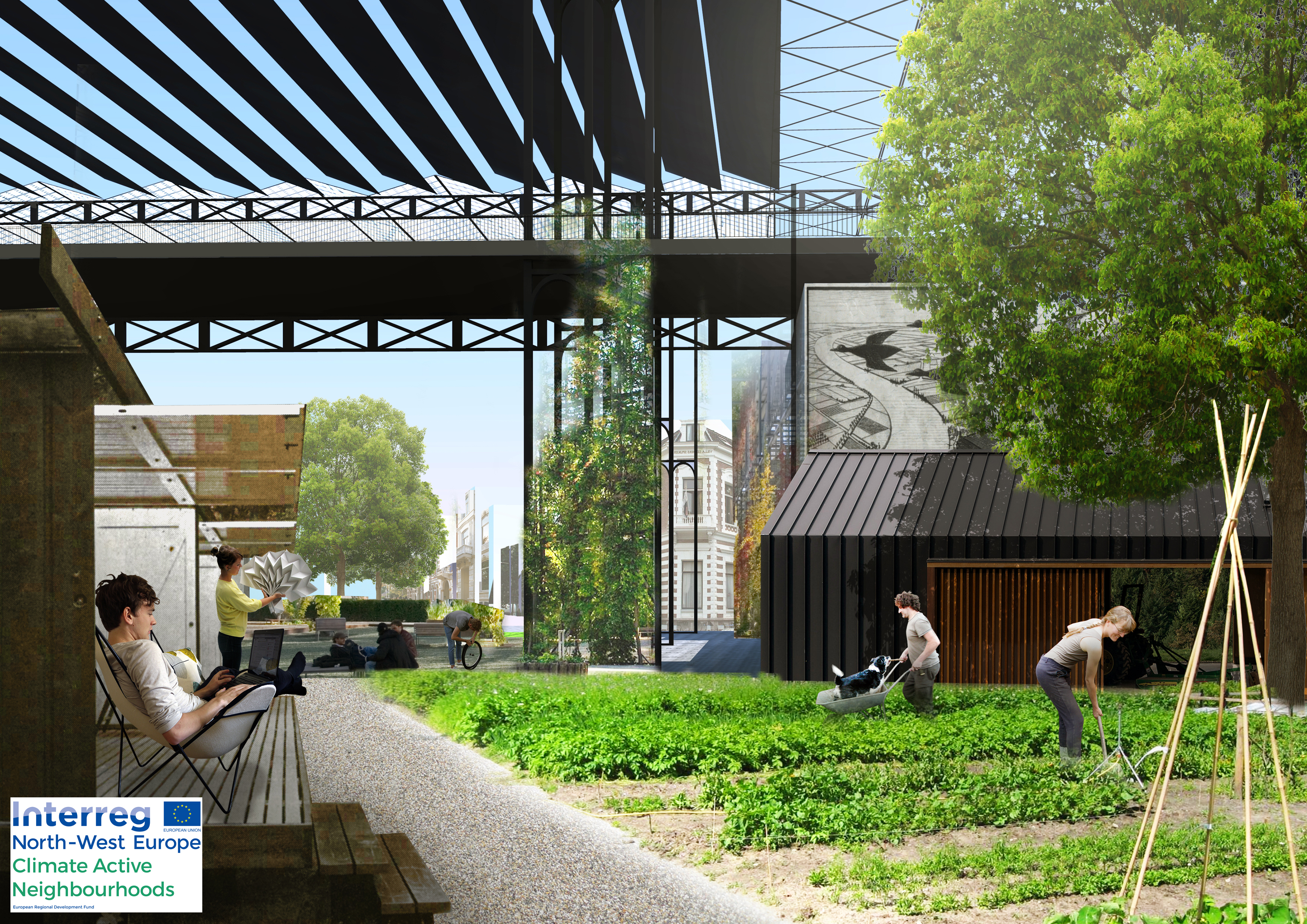 You wonder what your neighbourhood will look like in the future? Will it still be the same or will it have changed substantially due to climate change and fossil fuel depletion? Within a few decades we will have run out of the fossil fuels that now warm and cool our houses, and we will have taken measures to avert climate problems: reducing urban heat and rainwater damage. For the Spijkerkwartier, we have sketched what the neighbourhood can look like in a few decades and studied the effects that refurbishing the neighbourhood can have.

The main concept underlying the design study for the Spijkerkwartier was to use the urban energy and water fluxes to create win-win situations. What if we no longer think of the sun, wind and rain as problems in our cities, but as resources for a healthy, vibrant living environment?

The energy fluxes of solar radiation that currently cause urban heat problems, as well as the wind fluxes that cause wind nuisance can be harvested to generate renewable energy for the neighbourhood instead of causing nuisance. These fluxes can also be connected to the water system, for instance through the storage of heat in underground water bodies (aquifers). The Spijkerkwartier can be a place where the fluxes of energy and water are recombined to make the city climate responsive. These energy fluxes need to be used in such a way that the quarter can become as self-sufficient in energy provision as possible and at the same time create a thermally comfortable environment.

There are many ways to respond to the depletion of fossil fuels and to save energ in order to reduce CO2 emissions. The buildings of the Spijkerkwartier can be retrofitted with insulation and better heating and cooling systems. The resulting expected lower energy use in 2050 would amount to about 16 M kWh of electricity and 35 M kWh of heating energy (e.g. gas) for the Spijkerkwartier. But when the Spijkerkwartier is supposed to generate its own energy supply, many spatial interventions that reach beyond the building interiors will be necessary. 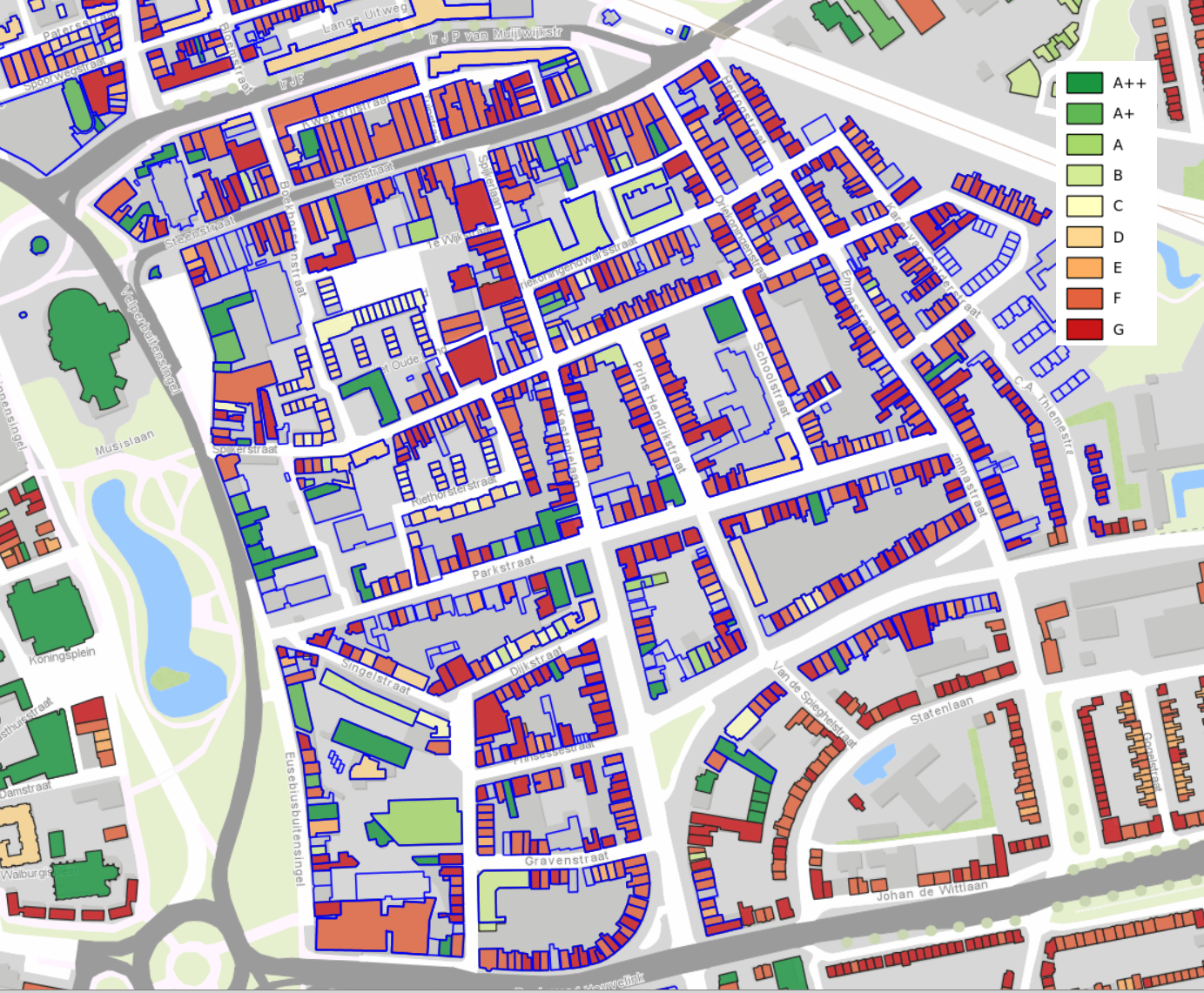 Energy labels of the Spijkerkwartier

The urban heat issues in this densely built-up area need to be addressed. A cooler environment in summer can improve thermal conditions indoors and outdoors. People should have a comfortable ‘physiological equivalent temperature’ outdoors where the mixture of air temperature, humidity of the air, ventilation and some other microclimatic factors create thermal comfort. This also entails that areas with excess wind exposure need to be adapted as people also want a thermally comfortable environment in the cooler seasons. Such an urban environment that provides more outdoor thermal comfort implies in turn that less energy would be needed for cooling and warming houses. The Spijkerkwartier has pressing urban flooding problems that need to be addressed as the neighbourhood is situated at the foot of the Veluwe hills. It is a catchment area for rainwater that flows down the streets of several neighbourhoods situated on the tops and slopes of these hills. As a consequence, large amounts of rainwater can accumulate in the neighbourhood. During peak rain events the streets and cellars of some areas in the Spijkerkwartier have been heavily flooded several times in the past few years. Such incidents will occur increasingly frequent in the future and need to be avoided by all means by retaining the water in other places before it can cause damage. 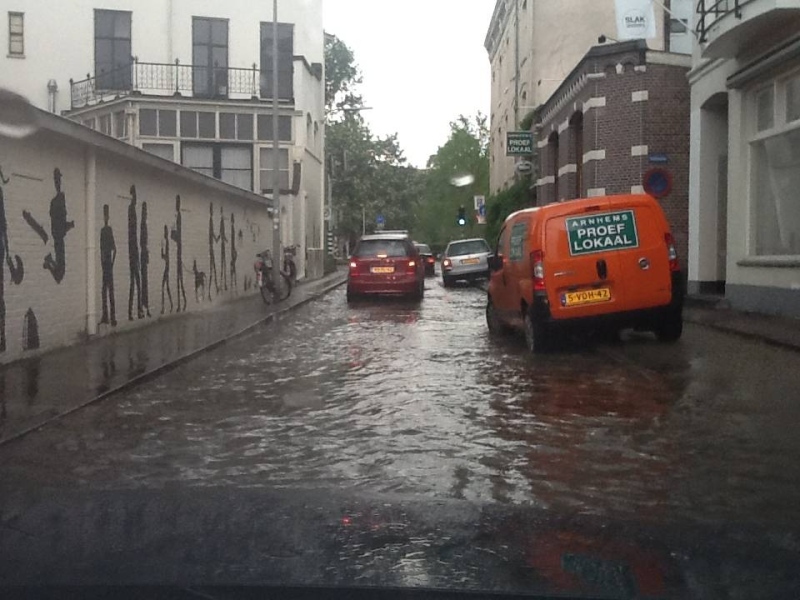 Interactive process with the neighbourhood

The design process was deployed in communication with the neighbourhood. The students presented site analyses and first solutions to people from the Spijkerkwartier and other interested parties. The locals gave input and critical reflection in small panel discussions that helped the students to refine and improve their designs. This interaction was facilitated by Patrick Hoogenbosch (De Blauwe Wijk Economie), Hans van Ammers, Anton de Kleijn (both Arnhem municipality), and Muriel Denayer (Alliander). We highly appreciate the support of these four enthusiastic individuals! 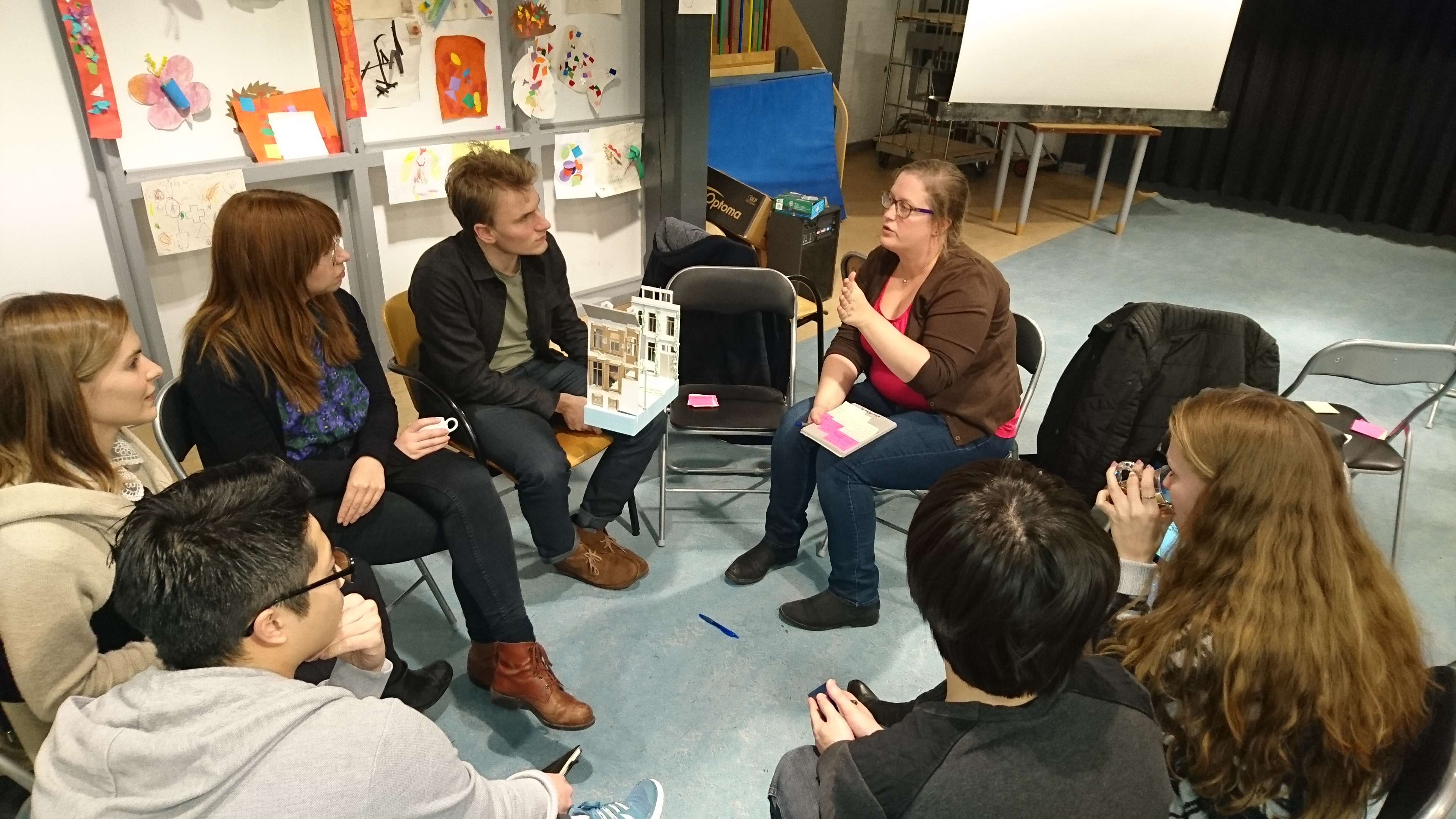 During consultation with the neighbourhood

We have to adapt our cities in the Netherlands to the major future challenges of climate change. Our cities will be warmer than ever and we have to deal with the increasing amount of peak rain events. We also have to rebuild urban energy systems, making use of renewable energy to prevent total depletion of fossil fuels and mitigate further global warming. This has to happen in the urban fabric as much as possible because the surrounding landscapes are needed for other aims than energy production. We need to refurbish existing and historical areas, and plan new urban areas by integrally addressing the challenges induced by climate change.

Climate responsive design requires suitable approaches in different neighbourhood types. In a dense mixed use old neighbourhood as the Spijkerkwartier, there is little space for new interventions. The amount of horizontal surfaces that can be used for solar energy production is limited as most roofs are slanted. Also limited is the availability of vertical urban surfaces to catch solar and wind energy fluxes as many façades have a monumental status and changing them would significantly change the ambiance of this popular neighbourhood.

The ground surfaces that could be used for water retention are also scarce. Car traffic and especially parking take up a large part of the available space. This called for the application of different approaches. Some student groups took a radical approach in which they achieved full self-sustenance for energy in the Spijkerkwartier and resulted in massive interventions such as new canopies for energy production and shading that almost cover the entire neighbourhood. Others chose a modest approach in which they preserved the monumental character of the buildings and placed small interventions. These groups were only able to provide fractions of the energy needed for the Spijkerkwartier. To deal with the rainwater all groups chose to remove as many cars as possible from the streets, concentrate them in garages and ‘un-pave’ major parts of the streetscapes. All these interventions will significantly impact how your cities will function and look like and we hope that the work of the ‘climate- responsive Spijkerkwartier’ project has inspired you!

The sliding photovoltaic panels can be used according to solar influx direction and daily use patterns. When placed on rails above streets they can be steered by a sensor system. When placed on houses and inhabitants are not at home during the day the panels are closed and shade the interior against the Southern sun and collect solar energy. In the mornings and evenings when people are at home the panels can be slid to Eastern and Western direction to collect solar energy from these sun angles.

Photovoltaics (PV) convert sunlight directly into electricity. PV is the third renewable energy source in terms of capacity. One average solar panel, sized 2.5 m2, produces 225 kWh per year in the Dutch context. To generate all the electricity of the Spijkerkwartier with PV about half of the surface of the neighbourhood would be needed.

Solar boilers essentially are black tubes filled with water that is heated by the sun. The warmed water is pumped through a heat exchanger and heat pump and then available for use as hot tap water or for heating rooms. The boilers on the monumental buildings of the Spijkerkwartier consist of an intricate ornamental frame of tube works that can, for instance, work as a replacement of window shutters or balcony railings. These solar boilers provide around 7% of the heat demand of the entire Spijkerkwartier in 2050.

Photovoltaic cells on a glass panel block the sunlight, causing more shade on the sidewalks and the ground floor of buildings. The solar cells also produce electrical energy. They are ‘bifacial’, meaning they also collect energy from the radiation emitted from the ground surface. The glass panels with photovoltaic cells produce about 150 kWh per square meter per year.

Small and superefficient turbines feature double contra-rotating rotors and are more efficient than most turbines in the same segment. The product chosen is almost completely silent and can produce 43 000 kWh per year. When these types of turbines are placed along the railway dike and some ‘wind fronts’, amounting to about 360 turbines in the neighbourhood, 30% of the electricity need of the Spijkerkwartier can be covered.

Vibro-wind technology consists of small (about 10 cm) oscillators that are mounted on mesh shaped structures and the wind flows around the small oscillators that through their vibration generate energy. They are an alternative to conventional rotary wind turbines and 1 square meter can generate 30 kWh/m2 per year in the wind climate of Arnhem. If you want to generate 100% of the energy demand of the neighbourhood, 1.3 times the ground surface of the Spijkerkwartier would be needed.

A plant cover on a façade provides shade for the building’s walls and thus intercepts solar radiation that would warm the walls, their surroundings and the building interior. Planted facades can lead to a decrease in surface temperature of up to a maximum of 30 ˚C of the wall itself and up to a maximum of 3 ˚C in room temperature, thus using up to 40% less energy for cooling.

This is not a normal façade greening but a system in which exchangeable panels are mounted on blind or unsightly walls. The panels can contain different types of plants, ranging from kitchen herbs to colourful flowering plants to mosses. The panels can be changed according to the residents' needs and wishes.

The green panel exchange works like a library. In the central spots of the neighbourhood you can find the so-called ‘hubs’. These are buildings with an exterior framework that is clad with green panels on the shady fronts (PV panels on sun exposed fronts). The panels can be slid in and out of the frames and Spijkerkwartier inhabitants can exchange the green panels according to their needs. A group of locals maintains the green panels when they are returned to the hub.

Pergolas or other kinds of plant support systems provide overhead shade and the plants cool the air through evapotranspiration via their stomata. These structures are preferably planted with species that cast their leaves in winter; thus enabling intrusion of winter sun in the spaces underneath.

A raingarden is a planted depression with permeable ground that allows rainwater runoff from impervious urban areas to be retained for a short time and then be absorbed. Usually, the rain gardens contain water for a short period only and serve other purposes, mostly as ornamental planting area.

A bioswale is a linear depression in the ground that is planted with ornamental plants or with lawn. It attenuates flooding risk by conveying stormwater away from critical infrastructure or guide it to retention areas. Bioswales also help to treat water quality by filtering the running water from silt, sand and organic matter.